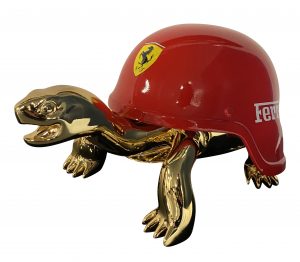 Diederik van Apple is born and raised in Leiden, Netherlands in 1985. In his childhood he always visualized the bigger picture. There was no line between fantasy and reality. He was addicted to Walt Disney books and legendary movies such as The Godfather, Scarface, Pulp Fiction and Boondock Saints. He loved watching, reading and fully go up in the stories, as if he ways part of the play himself. In 2003 he started his Law study but after two years he found out that he couldn’t express his creativity in this study and decided to stop. In 2005 he started as an Art Representative in an Art Gallery in Amsterdam. During those years he travelled around the world participating Exhibitions and Art Fairs for the Art Gallery and found his passion. With his experience, artistic insight and passion for art he started to think of designs for artworks. Combining his fantasy with the artistic vibe where he lived in for the last years. There was no line between work and free time and he started to build up to unlimited ways of digital mix-media art. After his first launch in 2017 he made three series of limited editions which were sold out in no time.

This was the beginning of Van Apple’s artworks and his career. He took his time for 6 months and brought out amazing new series of Artworks; Mr. Satoshi, Golden Tweety, Loved by Daffy and Mickey Who. After his latest releases he decided to go deeper into the creative vibes and took a single flight to Ibiza. The most artistic island on the earth was a great success and frequently new things are coming up. At the moment his artworks are very popular worldwide under art lovers and investors are intrigued by his style. The art of Van Apple is a combination of digital technics such as photography and famous characteristics. The basis of the art is aluminum or gold foil, then he adds holograms, colors, glitters, diamonds and other handcrafted items. All artworks are finished by hand with several layers of epoxy. By adding these layers he is able to create innovative and unique mix-media art with a fantastic 3D effect.